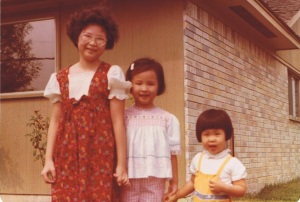 Siblings. They’re hard. They’re good. They’re complicated. They’re everything in between. Jeffery Kluger speaks to this eloquently and in depth in The Sibling Effect. The relationships we have with our siblings are unlike any other. How they know us and what they mean to us are not concepts anyone else in the world will ever know. For these reasons and more, they’re irreplaceable and complex and intense. Being, having, losing a sibling is good and bad and ugly and hard and easy and close and strained.

My parents always hoped their three daughters would have close relationships. My two sisters and I have close relationships. Just not with each other. My older sister is five years older than me, and my younger one is three years younger than me. My younger sister and I were closer as small children simply because the gap was smaller and we overlapped in schools and developmental stages somewhat. My older sister saw us as dolls or pests. As small children we all got along well enough. As we each entered pre-adolescence and began to form our own identities however, it quickly became clear that we were each wired very differently.

To this day, we each proclaim that we are nothing like the other, yet when people meet the three of us together, they remark how similar we are. I do know we each have very different priorities, values, outlooks, and interests in life. I do know my sisters do not understand me, and so find it difficult to have a relationship with me because they don’t really know me or know what to do with me. I do know I do understand my sisters, and so have judged them for their flaws and failings, making it difficult to have a relationship with them.

I do know every family has their dynamics and each person holds a role within the family. The enabler, the scapegoat, the overachiever, the splitter, the peacemaker. We have our own family dynamics, but we all love each other fiercely even when we don’t like each other. There is never a doubt that no matter how uninvolved we are in each other’s lives, that if one of us is in crisis, we all scramble to protect and save and aid.

This wasn’t enough for my parents. They are grateful we love each other, but they wanted us to like each other too. The three of us have always known this. Most of the time when we get together for holidays, we get along well enough. By most of the time, I mean about half the time–it’s honestly a crap shoot. But even when we “get along,” the cracks start to show and the jabs and snarky remarks and eye rolls start to slip out.

This started to change about a year ago. My mother has not been in good health for several years now, and her health continues to decline with each new infection and hospital admission and oxygen tank. My father has gotten older and shakier and so very tired as each day passes. We are reminded of their mortality every day. Something about this has shaken some sense into the three of us. At different times through the years, one or two of the three of us would make attempts at strengthening our relationship. But something finally aligned for the three of us last year. Not a word was spoken, but the air between us changed, and all three of us began to make an effort at the same time.

At first, our attempts were tentative and clumsy and unsure. By Christmas, it was genuinely nice to be around each other and we enjoyed each other. This summer, my children will spend a week with my older sister and her family. We’re not best friends, but we’re really getting along now. We’re trying to live the idea that it’s better to be kind than right. It’s not all smiles and roses. We are still the same people, after all.

No, wait. I’m not. I don’t know about them, but I know I’m not. I know I’ve finally (mostly) (OK, sometimes) let go of my old script and expectations of them, and how they should be, and how I wished our relationship were different. I’ve learned to be the kind of person I want to be instead of hoping they would be a different kind of person. How? Not having all the time in the world helps. Knowing we’re all dying and that our family constellation will be changing in the inevitable future helps with motivation. I don’t want to be left wishing things had been different when I control if things are different now. And by “things,” I mean my experience of them, which is all I can control.

Their snarks and comments and actions–they could be so hurtful and alienating and critical and mean and callous and judgmental. I see now they were ironically just trying to connect with me the only way they knew how. So now I try to smile and thank them for the gift of themselves. Before, when I’d confront “bad” or “inappropriate” behavior or musings, I was rejecting what they were offering me, which is themselves. If these were tangible gifts I would never dare criticize it and throw it away in front of the giver. I may have no use for the gift, nor like it, so I simply won’t use it when they leave. But I hold it gently for a while before putting it down. Not every gift is to our liking.

I choose to let the words and actions be what they are in that moment. I’ve ceased hoping or expecting the people and the words and the actions to be different. I accept them, and I accept their gifts of themselves. In doing so, I connect with them.

I’ve found that this initial connection is warm and contagious, and encourages them to connect as well, so that we try to handle each other with kindness and gentle unconditional acceptance. We laugh instead of sigh, and tease with eye rolls instead of stare with daggers. We breathe more than we snark. Not all the time, but we’re practicing. I’m grateful we have a little bit of time to practice. Mom would be proud.