Posted on April 27, 2017 by bonnevivantelife 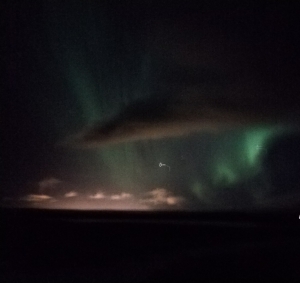 Perspective is everything. “We don’t see things as they are, we see them as we are.”

I try to remember perspective and gratitudes, and how important both are for my sanity, ability for acceptance, and sense of peace. It’s not always easy, because life gets in the way. I’ve found though, that it’s important to be mindful to seek perspective when in the midst of anger, or disappointment, or irritation.

A recent evening in Iceland provided a rich opportunity for this practice. (By that, I mean it was a complete shit show). When I travel with the kids, I try to keep expectations low and plans fluid. We were four days into the trip, and so far everything had been outstanding beyond belief. The landscape was just breathtaking. We were meeting lots of new, fun friends. We were having amazing adventures hiking glaciers and walking behind waterfalls and going down into lava and ice caves.

We were also spending our nights under heavy cloud cover. No possibility of Northern Lights. Until one night, it looked like there might be a slim possibility. The kids and I explored the city and mulled our options over dinner. They were intent on seeing Northern Lights. So we decided to go for it. We popped into a tourism office as they were closing. Somehow I ended up paying more than three times what I had expected for the last remaining seats on a small van because everything else (cheaper large bus tours) had quickly sold out.

I love being spontaneous. Until I’m not dressed for the elements. And waiting an hour in the snow for the bus. Holding leftover miso soup from dinner that La Chica insisted I must bring back to the room. By the time we were picked up for the drive out to the National Park to search for Northern Lights, I was already a little grumpy.

The hours pass. The temperature drops. The winds pick up. The children get tired and cold and cranky. The soup gets spilled all over me so all 15 of my fellow tourists get to smell eau de ginger miso soup for the next 4 hours. I’m left with frozen fingers, only a cellphone camera, a Boy who refuses to get out of the van, and La Chica who is dead asleep. I’m a couple hundred dollars lighter. And a bit more than a little grumpy at 2am.

I decide I’m going to make the most of my few hundred dollars and I force myself to stay outside as long as possible. I decide I’m going to try to take photos on my cellphone even though everyone else with DSLRs and tripods tell me it won’t work. I decide to show them I’m just as stubborn as the aroma of soup is.

I learn from our very kind tour guide that the faint light wisps in the night sky aren’t delicate cirrus clouds, but are actually the Northern Lights. I learn from a kind tourist that this is usually what people see, faint white or light green swaths of light that really look like faint clouds. And if you stare long enough, the shapes and intensities shift and change–and that’s when they’re dancing.

I start to take pictures of the dark sky, and I’m stunned. I learn from these kind people that the lens of the camera pick up colors our eyes cannot detect. So I keep taking pictures with my stupid cellphone, and I see blues and greens and pinks.

I’m reminded that what we see in life depends on what lens we’re looking through.

I’m reminded there is light in the darkness.

Or I could switch lens. I could see things as the person I want to be. I could be grateful for such an opportunity to learn to see the lights, to actually experience the lights, to have the opportunity to practice perspective. And I’ll be damned if I’m not grateful I recently upgraded my cellphone and apparently have a pretty kick-ass camera in it.